Portfolio > I for Nested Pattern 2019 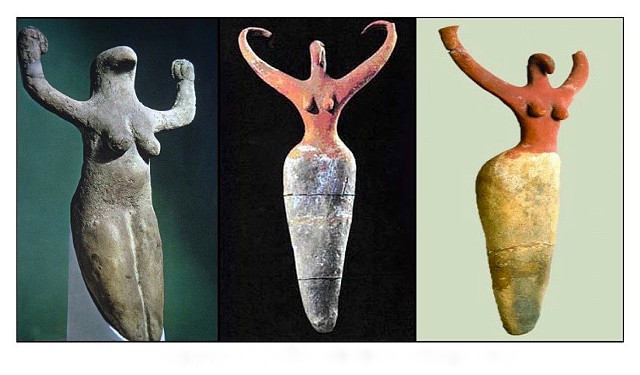 Reference I
< previous next >

Marija Gimbutas' archaeomythology scientifically analyzes the material database and draws possible and probable inferences from these analyses to reconstruct the symbolic, religious ideology of Old Europe. Through her research she provided evidence of women-centred societies in prehistory, particularly in eastern Europe. This she had found through the discovery of thousands of female figurines recorded in The Living Goddess and which are evidence of the ‘powerful presence’ of the female principle beginning 9000 years ago and into the early historical period. This world that existed before written history was revealed using archeology, linguistics and mythology. Marija Gimbutas discovered that these prehistory female sculptures expressed far more functions than just fertility and motherhood. She defined the goddess as unifying all ‘natural things, as a metaphor for earth’s power’. These peaceful women-centred societies ended as horse-riding invaders spread across Europe and Asia introducing hierarchical systems, violence and male ownership. Male gods and warriors replaced the early goddess symbolic systems now relegated to powerless brides and wives. Marija Gimbutas’ theory of a prominent female principle has enormous implications for the current status of women considering paleolithic and neolithic women played such an important social and cultural role before the warrior age. She refused to refer to these early societies as matriarchal as such terminology is understood in relation to patriarchy and dominance over others. Her preferred terminology of this early societal structure was ‘matristic’ because they were non-hierarchical.